The tv series season The Misery Index Season 2 is already released on TBS in the USA. The upcoming TBS release date in the UK is to be announced. TBS is bringing more humor into homes with Season 2 of the outrageously entertaining comedy game show The Misery Index, returning on Thursday, May 14 at 10:30pm ET / PT. Host Jameela Jamil reprises her role alongside the stars of truTV's Impractical Jokers, comedy troupe The Tenderloins - Brian "Q" Quinn, James "Murr" Murray, Joe Gatto and Sal Vulcano - as panelists translating the most miserable of mishaps into outright hilarity at a time when we need it most. Inspired by the card game Sh*t Happens, The Misery Index features teams competing against each other by attempting to rate hilarious and miserable real-life events based on the "misery index," a ranking system created by a team of psychologists. This season will feature special themed episodes including dueling grandmothers, a visit from one of The Tenderloins' family members, and a showdown between motherlands. 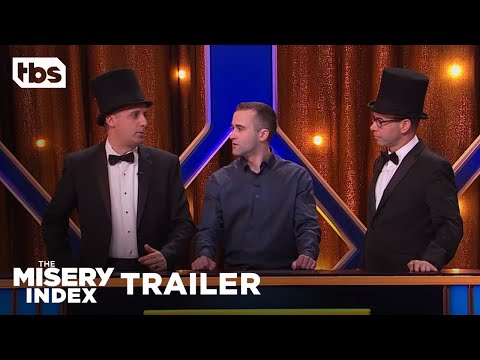