The movie Home is already released on Blu-ray, DVD, VOD and Cinema in the USA and UK. Home is an American 3D computer-animated buddy comedy film from Dreamworks Animation and 20th Century Fox. It is based on a 2007 children’s book called The True Meaning of Smekday, by Adam Rex. An overly optimistic, yet inept, alien race called the Boov led by Captain Smek invades Earth to hide from their mortal enemy and make it a new home. Convinced they are doing a favour, they begin to relocate the human race, but one resourceful teenage girl, Tip, manages to avoid capture. When on the run, she is accompanied by a banished Boov named Oh who has accidentally notified the enemies of his whereabouts. Voice cast includes: • Rihanna as Gratuity "Tip" Tucci, a teenage girl. • Jim Parsons as Oh, a Boov. • Steve Martin as Captain Smek, the leader of the Boov race. • Jennifer Lopez as Lucy Tucci, Tip's mother 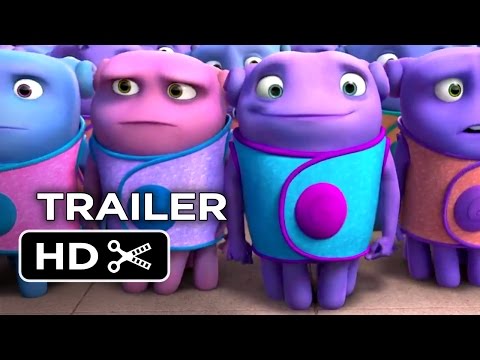