The smartwatch Apple Watch is already released on Sport in the USA and UK. The Apple Watch is a Smartwatch device created by Apple Inc. It was announced on September 9th 2014. It has fitness tracking and health orientated capabilities as well as the customary integration with iOS and existing Apple products and services. The Apple Watch comes in three models, with a wide-variety of case and band options. The Apple Watch is compatible with the iPhone 5 and later models running iOS 8 with round apps that are scattered around the screen. The device also works with Apple Pay, a mobile payment service that was introduced at the same time as the Smartwatch itself, and it is also capable of receiving phone calls, and iMessage or SMS texts. As long as you own a compatible device, you can also use the iOS 8 feature ‘Handoff’ for first and third party software. Finally, it can control the Apple TV, and act as a Walkie-talkie and a a viewfinder for an iPhone camera. That watch comes in two sizes – 38 mm and 42mm, spread across 34 individual models, grouped into three ‘collections’. The touch screen is pressure sensitive. 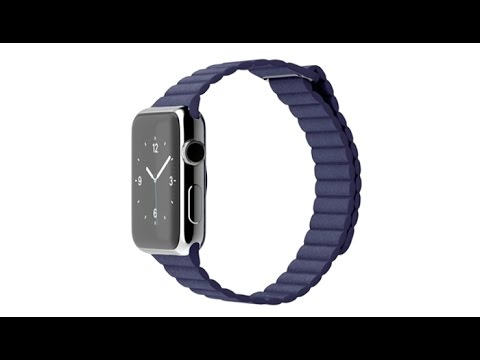